This work presents the study and analysis of different topologies of three-phase converters used in electrical traction systems. In addition, an optimization methodology is presented where silicon carbide (SiC) devices are used in converter topologies. The use of SiC devices allows to work with higher switching frequency, greater operating temperature range and reduce power losses, this means an increase in efficiency in the part of the inverter system. In the proposed methodology, different variables are used, such as the switching frequency of the converters, the size and volume of the passive elements and the phase angle between the carrier signals used for the activation of the SiC devices, in order to achieve a reduction in the harmonic distortion in the three-phase current for the electric motor.

The main objective is to show the advantages and disadvantages of the use of this technology in this type of converters and how to obtain an optimisation in weight and efficiency. This has undoubtedly generated expectation in the different manufacturers and research groups dedicated to electric traction. 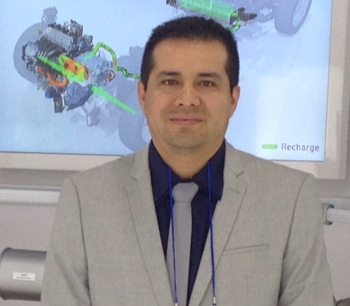 Efrén Fernández Palomeque is a specialist in electrical traction systems for hybrid and electric vehicles. He received his electronic engineer degree at the University of Azuay. He also has a specialization in Autotrónica at the University of Buenos Aires, Argentina. He is Master in Industrial Control and Automation at the ESPOL, and Ph.D. in electronic engineering in the area of the electrical Traction System Polytechnic University of Catalonia. He has around ten years of experience in the development and implementation of projects focused on electronic systems in cars and optimization in the conversion of conventional systems and automotive to electrical.
Previously, he worked as a professor at the Universidad Espiritu Santo (UESS) and the International University of the City of Guayaquil. Besides, he collaborated as a professor of the Salesian Polytechnic of the Cuenca. He is currently a professor at the University of Azuay, and he is a member of the Ergon research group. He is a collaborator in the Motion Control and Industrial applications (MCIA) research group at the Polytechnic University of Catalonia, Spain. He has represented Ecuador in various international congresses and has several publications in journals related to the electric mobility and optimisation of topologies of converters in electrical traction area.